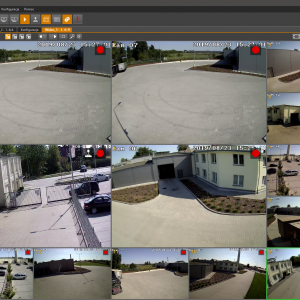 Our IT company completed an IP video surveillance deployment project. The task was to prepare and deploy the image registration system deployment for a production company. The production hall and surrounding area were supposed to be under supervision. The computer network was supposed to be redesigned within the task. The goal of the changes was increasing the computer network bitrate in the vertical structure and the adjustment of the active devices to cooperate with the IP cameras.

80 IP cameras including a few recognizing car license plates were delivered within the project. The IP video surveillance system was integrated with gate controlling automation in order to automatically open the gate in case of recognizing a vehicle found in the database. Additionally, the system was equipped with the alert-generating logic on the account of defining such events as line crossing by the objects or traffic generation at a certain time of the day in certain areas. Switches were replaced by devices consistent with the PoE standard and the logical computer network structure was changed. VLAN was deployed in the network in order to separate the video traffic and the SPF protocol. The computer network possesses redundant connections that should be activated automatically in case of failure.

The installed video surveillance system significantly increased the security of the monitored facility and the redesigned computer network increased the work efficiency in the computer system.